I was born and raised in Salina, KS where I was a three sport athlete competing in volleyball, basketball, and softball. This love of athletics and an interest in the human body led me to the University of Kansas where I got a B.S in Exercise Physiology. It was at KU where I was first introduced to the concept of chiropractic and I loved the idea of being able to help people become healthy and avoid drugs and surgery.

My first day of class was pretty surreal. It was amazing to talk with other students who had grown up with chiropractic and how different their health history was compared to mine. I saw an absence of the colic, chronic ear infections, sinus issues, allergies, headaches, ankle sprains, knee surgery and subsequent arthritic pain, sinus surgery, lack of energy, and general unhealthiness that had plagued me to that point. And I thought I was a healthy athlete! My passion stems from my own experience and my desire to help people live the healthiest, happiest life possible.

I received my Doctor of Chiropractic degree in 2004 and in addition to helping patients at the student clinic, I was able to travel to Nicaragua and Fiji to deliver chiropractic care to people who had never previously received any health care.

Following graduation, I moved to the beautiful Seattle area where I spent three great years in the Pacific Northwest. I believe everything happens for a reason, because it was in Seattle where I was introduced to and later became certified in a technique called Chiropractic BioPhysics© (CBP). CBP© is the most researched and proven technique available in chiropractic and has allowed me the opportunity to help make incredible changes to my patients lives.

I decided to return to Kansas to be closer to my family and friends and have since started my own family. I love spending time with my husband, Scot and my son, William and have enjoyed introducing him to some of our favorite things: good food, sports, and being active.

I look forward to meeting you and having you be part of the “Leahy Chiropractic Family”. 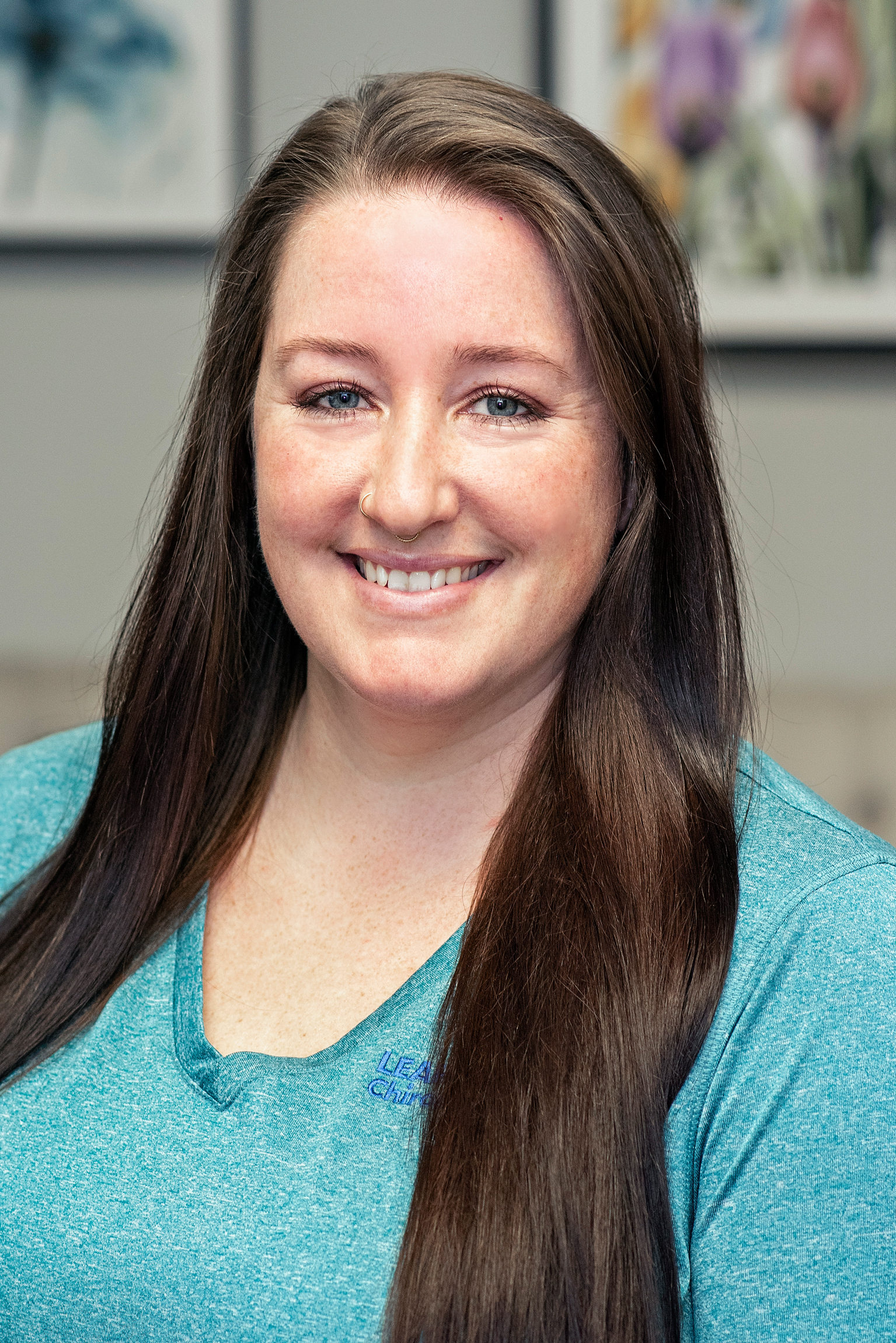 Hi, my name is Jessie! I have always been really intrigued by the human body and its capabilities in general, and I really enjoy being in a healthy, healing environment. I went to college at Ottawa University, where I played Volleyball and spent most of my time in the Athletic Training room. This is where I realized my passion for the human body and rehabilitation as a whole. I obtained my degree in Exercise Science. Through the years I had always had a problem with my back, and it continued to get worse. I have been through every type of rehabilitation out there. I have always been a fan of chiropractic but had never found the right fit that gained the results I was looking for. After starting with the Leahy Chiropractic family, I began getting adjustments from Dr. Leahy and started traction to retrain my spine, muscles and ligaments to hold themselves in the correct position. This so far has been the only form of relief I have been able to find.

I fully enjoy our patients, and being able to help them create a better quality of life with less pain as Dr. Leahy has helped me. One of my favorite things about our office is how much of a family based environment it really is. We see families and patients of all ages. I love the kids we see, and especially enjoy seeing their excitement to come into our office and get adjustments by Dr. Leahy. Most people would be nervous for a child to get adjusted but it is non-abrasive, and extremely light, allowing their body to grow and change in a more healthy manner. It is thrilling to see them grow, develop and enjoy life so much. I look forward to meeting you and working with Dr. Leahy in helping you achieve your health goals! 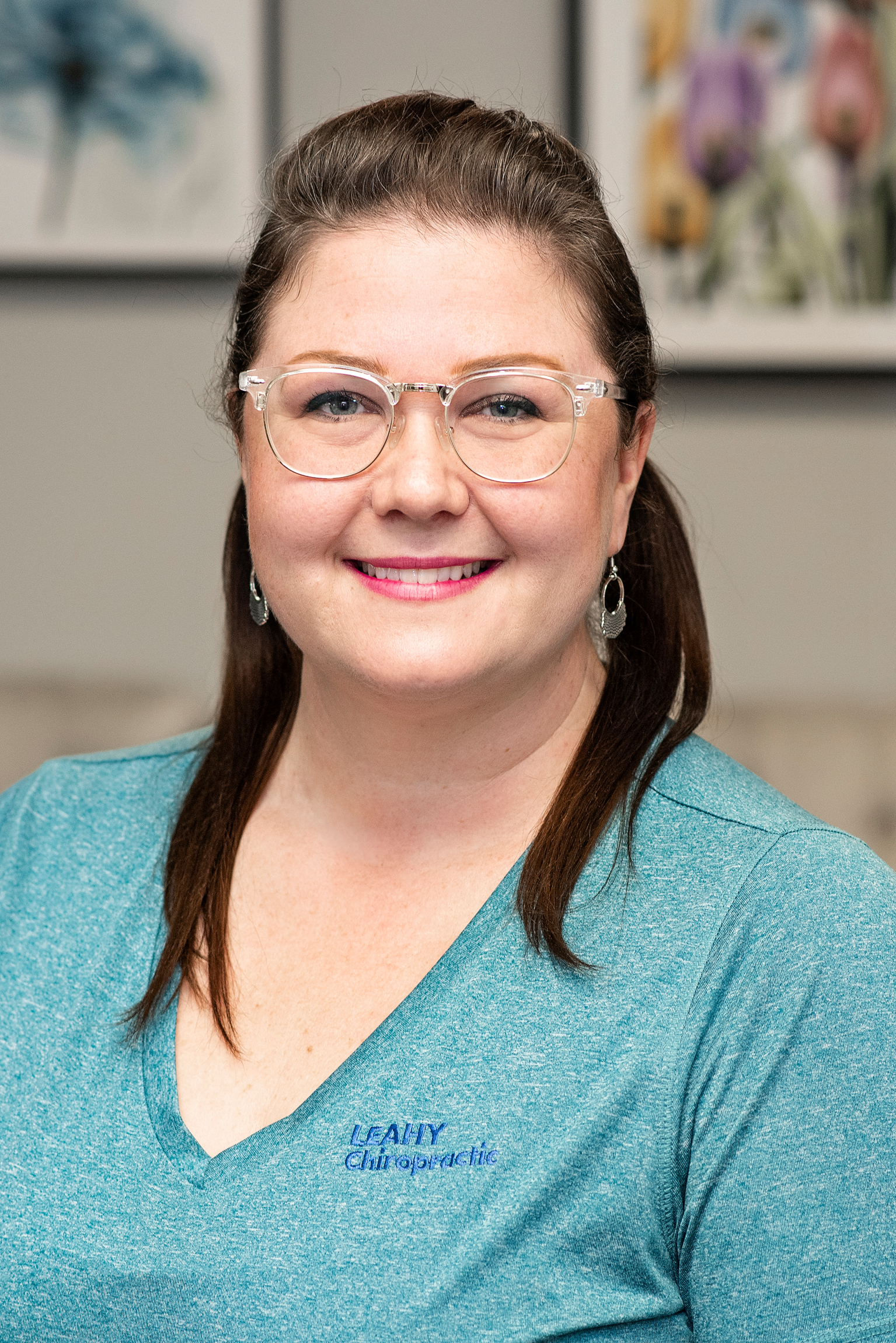 Hi, I’m Lyzz and the newest member of the Leahy Chiropractic team. I grew up in a small town in Kansas but have lived all over the country!

In 2012, my husband and I moved to Kansas City to be closer to family. In my free time you can find me working in my garden, cooking with my husband who is a chef, reading, and spending time with our large extended family.

I’ve spent most of my adult life in the service industry; but now I am so excited to be joining this team and seeing the benefits that chiropractic care can have on your life!